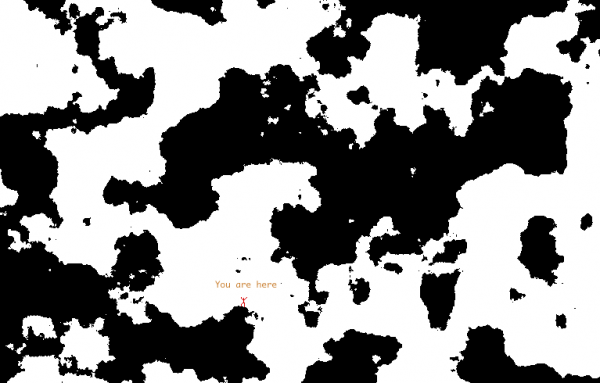 So I’ve been working off and on the past few days with this game idea I’ve had for over a year now. It features you as a space alien that crashes his ship on a desolate planet and must explore underground to find the materials and supplies needed to get your ship back up and running again. Then it’s off to the next planet.

My first task was to get some procedurally generated caves on the screen and I’m happy to say, after a couple of days worth of learning Java and writing my own Perlin Noise class I’ve got some pleasing results.

Big thanks goes out to Herman Tulleken over at devmag.org.za for this excellent tutorial in particular. His great explanation helped turn Perlin’s original and very difficult to read algorithm into something approachable to a practical newb like me. Once I have my custom Perlin noise class fine tuned and cleaned up I’ll try to post it here for anyone who may find a use for it.

Next step: I’ll either create several layers of cave depth behind the initial generated terrain for a nice pseudo 3D effect, or I’ll pursue creating mountains on the surface and lava at the core of the planet. The fun’s already starting!

Bookmark or Mention this Article