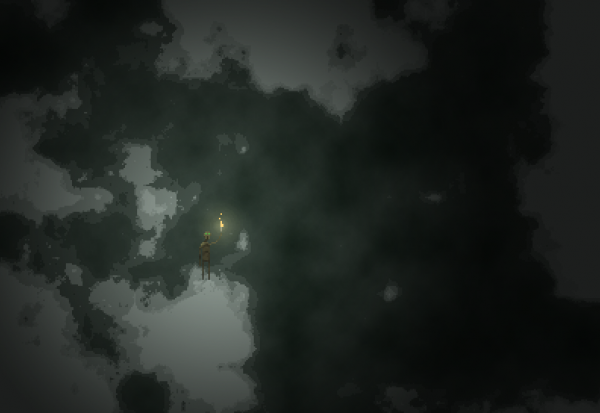 I’m really happy with how these drafts are turning out. Woke up in the middle of the night and decided to put together some Photoshop comprehensives of what I’ve been mulling over in my head for months. I have to say, one you actually pull something out of your imagination and view it subjectively it can be quite pleasing. These were composited with shots of the noise algorithm that was the subject of my last post.

The lighting really sets the mood but I also have an idea that I would like to use a culling method like the old Westwood game, Nox used to use. The way that Iso, top-down scroller blacked-out everything your character couldn’t see was one of the most intriguing visual features of the game. I’d love to do something similar here, just not sure where to begin blocking things out and what exactly is and isn’t visible. For an idea of what I’m talking about, watch this video in fullscreen mode and fast-forward about 2 minutes:

I’m really enjoying this, and learning Java is an absolute pleasure. To be able to take an idea and see it drawn and animated on the screen under your control is a very fulfilling experience. With the technologies we’re exposed to these days it’s no wonder the indie game development movement has seen a considerable boom lately.

Bookmark or Mention this Article